the art of building a playlist.

About once every couple of months, I devote the better portion of a morning to building a new playlist. The entire process – scouring the Spotify world for new gems, trying to build the soundtrack to life as is, working to encapsulate it all with the right title – takes a fair amount of time and invigorates me for the days ahead. Not all playlists are created equal, however, as evidenced by the dusty ones at the bottom of the list. 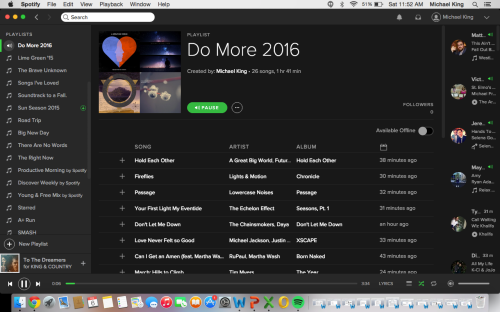 My first Spotify playlist was ‘The Right Now,’ and it serves as the soundtrack to my second year of graduate school. Over 200 songs long, it played over my office hours and under my thesis work. I’ve taken it with me on runs toward the sunrise and long drives beneath the stars.

There have been other ones in the time since: ‘There Are No Words’ for lyric-free background music. ‘Big New Day’ for my coming out. ‘Sun Season 2015,’ ‘The Brave Unknown,’ ‘Lime Green ’15.’ And, as of today, Do More 2016. Each of them feels totally different, despite a few songs appearing in multiple.

I’m not confident in saying I’ve mastered the playlist-building concept. As with writing, building an RA staff, gathering friends, and trying new things in the kitchen, I find that my process is characterized more by shots in the dark than by adherence to science. A little bit of ‘well, what about this?’

So, here it is – my process. Here’s how these things come about:

So that’s it. My curiosity spikes, I think, at the thought of how other people go about this. The scientific method? The reclaiming of previously built lists? I wonder what our answers say about each of us?