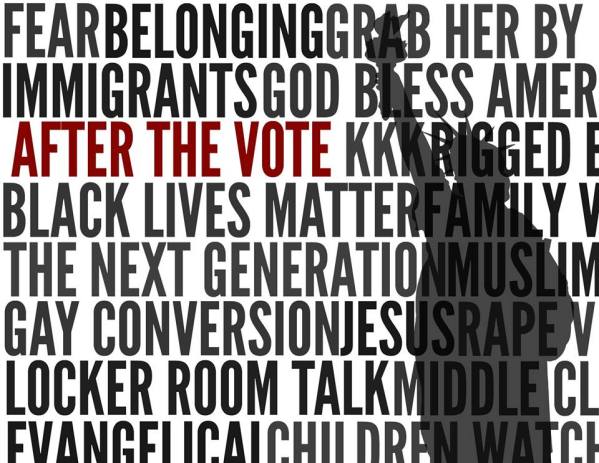 “There are some realities that need to be acknowledged, before hope can be restored in our communities and our nation. I’m seeing and reading people say, ‘the sky isn’t falling,’ and ‘the world isn’t coming to an end.’ Yes, there is truth in those facts. I’m not disputing the reality that we are still living on planet earth. That said, please do not interpret my previous statement as meaning I feel safe. I don’t – not fully. A lot of people don’t. I hope this will change over time.

“Another important reality is that I do not believe every person who didn’t vote for Hillary Clinton to be a bigoted, race-baiting, gay-bashing, xenophobe. Again, to those who voted for President-Elect Trump, I believe you when you say you don’t share these negative qualities. No matter your politics, we need to face the realities of the day. Check them out here.

“We must concede that, while the United States elected President Trump into office, it also opened the door of the Oval Office and the conscience of our culture to hate, racism, bigotry, misogyny and worse. The hate existed well before the Trump campaign started, but Mr. Trump’s language has only grown this devastating form of cancer within the borders he so vehemently stresses he wants to protect. I hope this outcome was indirect and not necessarily desired by most, but there are some who wanted and yearned for it, and if you can’t see it you need to look beyond your blinders. You can also refer to these first-hand accounts: Here.     …or HERE.

“I hope President-Elect Trump and many of his supporters will call on those exhibiting or threatening physical or mental violence and abuse to stop it! I hope President-Elect Trump will vociferously disavow the KKK and other hate group who have so blatantly supported him. I hope he realizes until he does he will intentionally be further disenfranchising a large portion of America.

“I hope that the concepts and ideologies of hope and change are ingrained within the American spirit enough so that we can begin to move forward under our new President, who strives to be the leader of all Americans through his words, his careful and thoughtful words, and his actions!

“Am I happy with the election results? To know me, is to realize my answer to that question is, heck no! That said, I refuse to be like the many angry and disgruntled Americans I’ve watched over the last 8 years. Those who despised President Obama and many of the policies he championed. Those who supported the congressional obstructionism that all but halted the federal governing progress. Those who constantly said, President Obama is not my president. Those who are being largely hypocritical as they call for unification behind President-Elect Trump a day after the election when they’ve had 8 years to do the same yet failed miserably at the task. I’ll strive to be better. We should all strive to be better! Today I heard and read many calls to do to President-Elect Trump what many angry Americans did to President Obama. This can’t be our norm. Let’s disagree and debate. We’ve gotta get to work by engaging with and mobilizing our communities so in 4 years the outcome of election night will more closely resemble the American dream.”

Writer. Chases joy. Working to share the mess and the magic. View all posts by Michael King