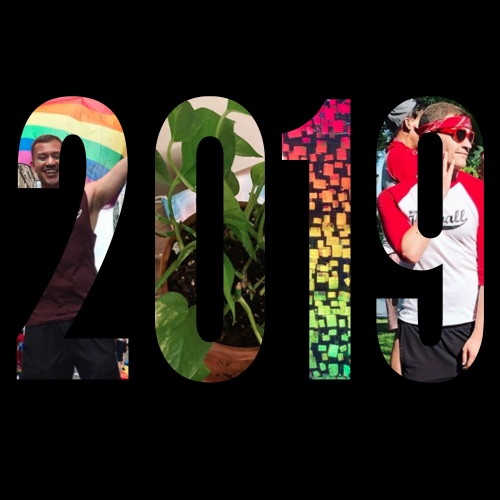 2019 arrived chaotically, waves of rainfall and loosely stitched plans ushering my friends and me into a dimly lit, low-energy bar with only a handful of minutes before the new year. We ordered drinks, grabbed the noisemakers scattered obligatorily across the bar and distributed them among the reluctant tables. Beers in hand, we watched the television set. When only thirty seconds were left, we shouted the countdown, our arms waving back like conductors at the unwilling orchestra.

By sheer force of will, or by nagging pull of tradition, cresciendo the orchestra did. Happy new year, we proclaimed together. Band of strangers, hunkered down away from the rain, building hopes and beckoning in a year of new chances.

As 2019 loomed, I found myself decidedly unsure of how to think about the year to come. Normally, I feel reflected and ready, setting a vision for myself and embarking. But 2018 was a year of big change –– letting go of an old chapter, moving to New York City, beginning again –– and I wasn’t sure I’d found my bearings.

I need to put down roots, I remember thinking. I needed to start moving through this city like a citizen, somebody who calls it home. The more I reflected on it, the clearer my next steps became: cook more meals at home, find friends, build a community. Paint an orange glow over the miles and miles of slate gray.

In a one-on-one meeting, early in the year, I told my boss about this, and he nodded. “I’ve noticed you spend a lot of your time hosting visitors and flying home,” he told me, “I think it’ll change your life to focus on your roots here.”

I started by making my bed every morning, a simple shift toward mindfulness. Per a friend’s recommendation, I checked out the world of Trader Joe’s, and my evenings became opportunities to cook for myself, plate my own nourishment, store the remainder for tomorrow’s lunch.

In the spring, I joined a kickball league for queer folks and met a wild array of inspiring, ridiculous, warm humans. They welcomed me in, and I rediscovered laughter and teary conversations and storied nights out and fragile brunches the morning after. By summer, I marched with them through the streets of my favorite city, Pride flag dancing in waves in the wind behind me. We passed Stonewall Inn, greeted crowds of thousands, laughed and danced and celebrated.

I broke new ground in ways intended and unintended. I bought new furniture, and I wept openly on the train home. I ran miles and miles, under every kind of sky, and I rolled my ankle on a visit to a friend, showing up at his doorstep with scraped palms and a month of healing ahead of me.

I left my twenties behind, let go of everything and everybody that wouldn’t be coming along with me to my thirties, and I felt gratitude that, sometimes, we don’t get to keep the things we think we want.

I look around, glimpse the faces that light up at seeing mine, the hands that reach for mine, the wild thunderclap of the city I get to try and burrow roots into, and I realize I’m living exactly the adventure I’d dreamt.

It was the year of conscious growing, of every mile carved from inches of stubborn hope, the year of believing before seeing, of wide-eyed sincerity wrapping arms around hard-won wisdom, the year of wild laughter, can you believe we’re here and this is real, the year of rediscovering my hands have the habit of reaching for what burns them, of training them to gently let go, the year of laughing with my sister over speakerphone, of learning to speak through the tears instead of choke to silence, the year of fighting to burrow through concrete, of trusting the sunlight to warm the sidewalks, sprawl out and unfurl, the year of dressing my limbs in every color under the sunlit sky, comprised of every last one, the year of believing in the wildest of magic, magic, magic.