book club: ‘the perks of being a wallflower’.

If I’m honest, The Perks of Being a Wallflower sat on my shelf for years before I finally decided it was time to read it. The film arrived in 2012 and moved me profoundly, and I knew I’d need a little distance before delving into the book.

This summer, on an evening I decided to venture out to a picnic table on campus and read, I took Perks with me. I’m glad that I did. 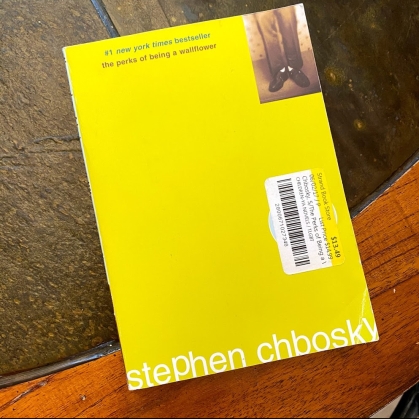 Charlie, the 15-year-old narrator to Perks’ story, shares his story via letters to some unknown recipient. Dear friend, he begins every entry, delving into his experiences with family and at school, making sense of the world around (and within) him. Charlie is an observer, habitually quiet and watchful, though his therapist urges him to ‘participate’ more. As a character, Charlie is profoundly tender and honest, lending his narrative voice a striking humanity.

His story begins to shift, of course, when he meets Patrick and Sam, two Senior students with an existing circle of friends. They invite Charlie into their world, opening him to first brushes with romance, sex, alcohol, music, drugs, literary critique, and Rocky Horror Picture Show. Unwittingly, they also open his eyes to harder truths of adulthood: heartbreak, one-sided relationships, closeted lovers, sexual histories. Wide-eyed, hopeful, Charlie works to make sense of what he sees.

Throughout the narrative, Charlie’s struggles with mental health make themselves gradually more apparent. At times, he is overwhelmed and begins crying uncontrollably, and he isn’t sure what provokes this. In the story’s final act, triggered in an unexpected moment, Charlie remembers a trauma from his childhood that he has long carried with him.

“It’s much easier to not know things sometimes. Things change and friends leave. And life doesn’t stop for anybody. I wanted to laugh. Or maybe get mad. Or maybe shrug at how strange everybody was, especially me. I think the idea is that every person has to live for his or her own life and then make the choice to share it with other people. You can’t just sit there and put everybody’s lives ahead of yours and think that counts as love. You just can’t. You have to do things. I’m going to do what I want to do. I’m going to be who I really am. And I’m going to figure out what that is. And we could all sit around and wonder and feel bad about each other and blame a lot of people for what they did or didn’t do or what they didn’t know. I don’t know. I guess there could always be someone to blame. It’s just different. Maybe it’s good to put things in perspective, but sometimes, I think that the only perspective is to really be there. Because it’s okay to feel things. I was really there. And that was enough to make me feel infinite. I feel infinite.”

At its core, Perks is an exploration of a hard world viewed through young eyes, taken in and explored honestly. To participate, to know this world, is to hurt and rebuild, and – with the right company – the possibilities feel infinite.