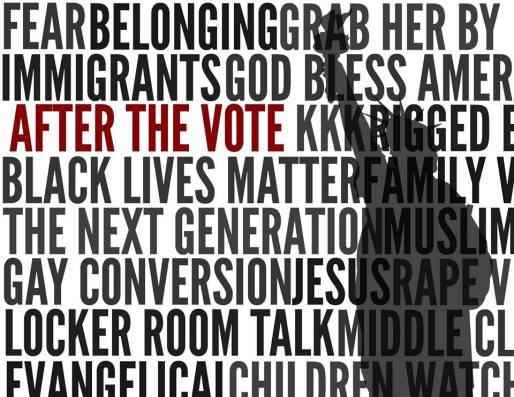 “Over the weekend when I was visiting home in rural southern Indiana, I drove the usual path to my house. I saw Trump yard signs, painted messages on plywood, and Trump 2016 flags hung up on flag poles; there was not a single sign supporting Hillary Clinton.

“When I woke up on November 8, however, there was not even the smallest doubt in my mind that Hillary Clinton would be the next president of the United States. I was very fortunate to walk into my polling location to discover there was no line for me to wait in. The number of people who voted early was incredible, and, in general, the voter turnout was huge. So, being sick with a cold, I put on my ‘I voted’ sticker and went home to rest, relax, and not stress. When the polls began to close, I opened a fresh tab on my browser and tuned into CNN’s live polling results. I refreshed the page periodically and watched the votes come pouring in.

“I remember sitting up late at night with my grandparents watching George W. Bush be elected for the first time; I was 8. Since then, I have watched every election. At first, this time, the ebb and flow of electoral votes did not bother me very much. However, when it came down to the last eight states, things began to feel grim. I was awake until 3:30 in the morning glued to my computer screen waiting for the official results. There was no way for me to fall asleep without knowing the true outcome, but fall asleep I did.

“In the morning, I awoke to a Facebook feed filled with anger, sorrow, heartbreak, despair, disappointment, regret, longing, and, most importantly, hope. Hope that things would not be as bad as predicted. Hope that we might learn something from the next four years to prevent it from happening again. Hope beyond hope that people will be kinder and more empathetic to one another. I struggled to contribute my own words to the world.

“Much of my passion for social justice and politics comes from a place of anger. As a social worker, I was initially interested in macro practice. This anger, however, is one of the reasons I chose to do primarily micro practice. I find it easier to do my work from a place of kindness and empathy this way. It is not healthy to be angry, place blame, and point fingers all of the time. There is far too much negativity in the world, and this election has shown that in spades.

“After taking time to reflect, I decided to share this: ‘I have had trouble figuring out what to say; I’m one big mix of emotions and I don’t want to contribute to the negativity by writing something out of anger. Truly, words cannot express my extreme disappointment with the people of this country. Ignorance, hate, fear, and misunderstanding are deeply ingrained in the past and present of this country. My only hope is that we, as a nation, do not let it become a part of our future. Racism, sexism, homophobia, xenophobia, and transphobia are alive and well. I challenge each and every one of you to go out and listen to someone on the other side, really listen. Bridge the gaps of hate with empathy, kindness, and respect. We can use this to build momentum for a better and brighter future, but it won’t happen without all of us. Take some time to take care of you today. Tell someone you love them. Do not stand for injustice. Stay strong, everyone.’

“The world could use more empathetic, kind, and respectful people. We will all play a key role in this and we will see the repercussions of Donald Trump’s actions reflected in the landscape of our world. What will happen to the millions of people utilizing Medicaid and insurance services facilitated by the Affordable Care Act? How will we handle the unraveling of civil rights issues such as marriage equality? In the face of the executive and legislative branches being controlled by the Republican Party (and a strong chance of the judicial branch, as well), how will we come together to advocate for change?

“One thing I know is that I will be on the frontlines – educating, advocating, and creating positive change. One person at a time. I feel called to be an even stronger ally and an even better support to those who are struggling to flourish. It is now our duty to learn from all of this and make America great for the first time.”