I found Among the Ten Thousand Things in an array of books arranged on the table of Brooklyn’s Greenlight Bookstore. My eyes were drawn to the title, arrange in block fonts against what appears to be a city skyline, and my hands were compelled. Sometimes we know we will find ourselves in stories by instinct.

My journey reading the text, however, has been punctuated and stretched. I read the first two sections on city train rides, the next eight or so on an afternoon read at the campus library in the fall, six more at the airport this spring, and the rest over muggy summer days. Each time, I was pulled back into the worlds of these characters –– Jack, Deb, Simon, Kay. 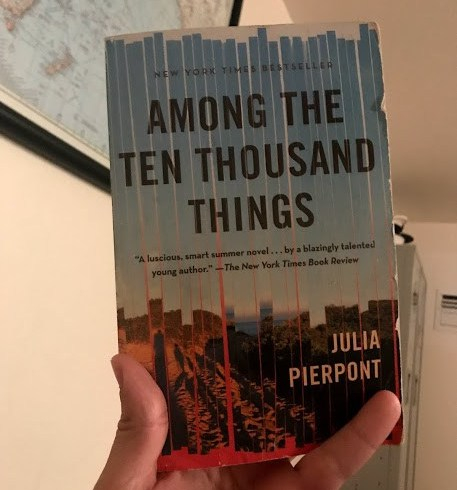 The premise of Among the Ten Thousand Things is immediately intriguing: a woman, angry at having been abandoned by the married man with whom she has been having an affair, prints out their emails and sends them in a box to his wife; by accident, they wind up in the possession of their eleven-year-old daughter.

I have a habit of finding novels that place family structures under an investigative lens (A Spot of Bother, Mark Haddon; The Red House, Mark Haddon; Imagine Me Gone, Adam Haslett –– etc.). As with real-world families, the narratives are comprised of a variety of perspectives, including known and concealed fears, hopes, and worries. Only the reader gets to know the situation from all angles, jumping from head to head, as families navigate their lives together.

“Inside, it was just paper. So many pieces of paper, thrown together like tickets in a raffle.

The feeling that her domino eyes were running over something she shouldn’t see. She tried to make them stop, or to see without reading, but they could not, would not stop.”

Among the Ten Thousand Things explores the perspectives of all four Shanley family members: Jack, artist and father and revealed traitor to his family, whose ego reassures him he will be able to bounce back from this; Deb, dancer and mother and disappointed wife, trying to navigate her own emotions while providing support to her children; Simon, teenager and brother, perhaps too busy with his own world to figure out the impact of all this; and Kay, daughter and sister and discoverer of the mess, standing on the brink of adolescence and already facing the confusion that transition brings.

As the reader acquaints with each character’s means of making sense of their worlds, they gain a more intimate understanding of the entire family unit. We learn that Kay spends a lot of her time among peers in her own company, writing new Seinfeld episodes in her notebook. Jack, we realize, has a habit of throwing himself into his art when his life becomes too complicated, but he is unprepared for failure in either realm. These glimpses inform us not only about these characters, but about people, and the rich inner worlds we all carry around with us.

“In a way, too easy, that the Hertz people should send him off like this, all because of the card in his wallet that vouched that he had money, and another, softer card, confirmation that once, at sixteen, he’d been able to parallel park. If human cells regenerated, what, every seven years, then wasn’t he a wholly new person? Several new people, it felt like, and not all of them knowing how to drive.”

The revelation that Jack has been carrying on an affair places all four characters at a point of needing to determine how best to move forward. With this truth on the table, Deb is faced with navigating what she is willing to accept from a partner, what their relationship has meant and can mean. Kay and Simon now face their father under a more honest lens, no longer quite the hero they’d imagined. Jack has to face himself, has to find footing in a world he’s been accustomed to ruling unchecked.

The plot in novels like these mimics that of real life: there are intriguing peaks and circumstances, of course, but there is also ennui. Even in our toughest circumstances, in our wildest chapters, we still have moments in our days where we study bugs on the wall, lose ourselves to old memories, grab coffee with acquaintances we’d rather avoid. At the conclusion of Among the Ten Thousand Things, as you might imagine, not all the threads are tied together. Life is still to be lived, for all four Shanleys, and they’ve still got plenty to navigate. (I suspect some readers will finish the text, set it down, and exclaim, ‘Did anything really happen in this book?’)

“They went. They were away two weeks.

For eighteen days, the apartment sat empty. No light  bulbs burned out. The four stone putti over the television did not correct themselves, Spring beside Fall, Summer with Winter.

Only the wireless went on, invisibly complicating the air.”

One interesting facet of the narrative: about midway through the novel, there is a section that forecasts the entire future of all four characters, granting the answer to the questions that often drive us forward. We learn whether Jack and Deb are able to reconcile their marriage, what Simon and Kay make of their own lives, and a lot more. After this section, we are steeped back into the chronological path forward, perhaps being asked to just be with the characters where they are. Still hoping, hurting, healing.

When I finished Among the Ten Thousand Things, I felt a small bit of grief. Having invested pockets of a year getting to know the people in the story, I found myself missing them. It’s a testament, I think, to Julia Pierpont’s writing, as she is able to yield empathy for all four of the Shanleys. I had the opportunity to sit with them in their grieving, travel with them in their attempts to stitch their worlds back together, and I had to bid them goodbye.